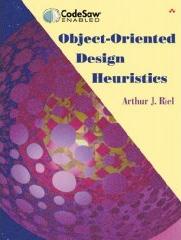 Object-Oriented Design Heuristics is the book I’ve been reading for the last two months. Besides of the amount of work in this period, I could always find some time to read it.  The book has 11 chapters and, without appendixes, 217 pages. So, it’s not a exhaustive reading.

The book offers insight into object-oriented improvement. The more than sixty guidelines presented are language-independent and allow you to rate the integrity of a software design. The heuristics are not written as hard and fast rules and cover important topics ranging classes and objects to physical object-oriented design.

As you might be curious about the heuristics, I will be nice and tell some of them:

Well, it’s good for now. If you like the advices, there are a lot more inside the book.